Mind the weather: Sad voters shy away from political reforms 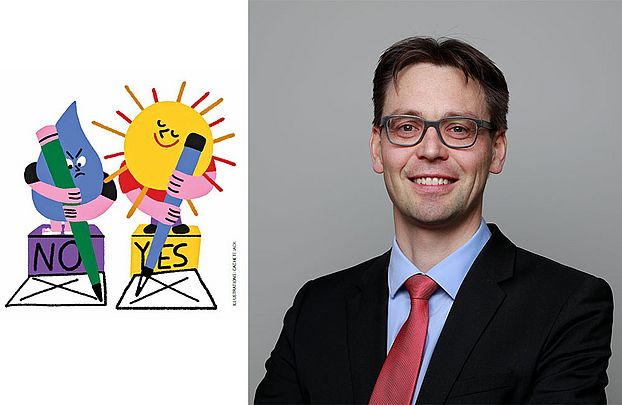 Substance matters for how voters decide. However, voters are also affected by situational factors like the weather. If it is cloudy and rainy, voters are more likely to vote against legal change - and thus for the status quo. The effect of bad weather is large: On a rainy vote weekend, voters are 1.2 percentage points less likely to vote for political change in Switzerland. An effect attributed to voters’ emotional reactions according to a recent study by Armando Meier (University of Chicago and University of Basel), Lukas Schmid (University of Lucerne) and Alois Stutzer (University of Basel) published in the well-recognized European Economic Review.

The “weather experiment”
In the study, the authors analyze the voting behavior in 420 propositions across almost 3,000 municipalities and spanning over 50 years yielding almost a million municipal vote outcomes. The large sample allows a statistical analysis that separates the effect of the weather from characteristics of the propositions or the general political orientation of the citizens in the municipalities. Importantly, it is not a different crowd of conservative voters going to the ballot box on rainy days, an obvious alternative story. Moreover, the influence of the weather at the vote weekend got smaller in cantons that adopted complementary postal voting. And for those who are likely faltering between the alternatives, the authors find the largest effect towards a ‘no’ when it rains.

It may make the difference
There have been serious votes in the Swiss referendum history that were decided by a narrow margin. Simulation results indicate that a sunny weekend might have changed some of them. So, it turns out that a thin majority of Swiss voters would probably have supported rather than rejected a membership in the European Economic Area in 1992. While the treaty still would have failed because it clearly missed a majority of cantons, the development of a shared strategy for the relationship with the European Union would not have become easier.

Emotional after all
But why are citizens more likely to vote no when it rains? They feel down. Not only introspection suggests but also many studies document that bad weather or long winter nights lead to negative emotions. And our emotional state colors the attractiveness of the options between which we choose. In the voting context, we have to think about the future and interpret a complex set of information. Emotions function as supplementary information in such situations – feelings-as-information as it has been termed – and individuals become more risk averse if they experience negative emotions. As a consequence, they evaluate the status quo more favorable. This is a reaction previously observed, for example, in people’s investment behavior.

Strategists be aware
Governments and strategists have to consider two possibly opposing forces when scheduling votes: an impact of weather on the composition of the electorate and emotional effects. Anecdotal evidence suggests that the Scottish independence vote was intentionally scheduled on a date with a pleasant weather forecast. Let’s see in what season a second referendum on the UK’s relationship with the European Union is scheduled.

Download an interview with Prof. Alois Stutzer in myroche in English or German ...