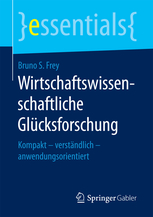 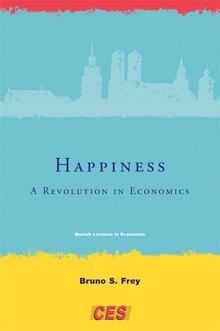 Revolutionary developments in economics are rare. The conservative bias of the field and its enshrined knowledge make it difficult to introduce new ideas not in line with received theory. Happiness research, however, has the potential to change economics substantially in the future. Its findings, which are gradually being taken into account in standard economics, can be considered revolutionary in three respects: the measurement of experienced utility using psychologists’ tools for measuring subjective well-being; new insights into how human beings value goods and services and social conditions that include consideration of such non-material values as autonomy and social relations; and policy consequences of these new insights that suggest different ways for government to affect individual well-being. In Happiness, emphasizing empirical evidence rather than theoretical conjectures, Bruno Frey substantiates these three revolutionary claims for happiness research. After tracing the major developments of happiness research in economics and demonstrating that we have gained important new insights into how income, unemployment, inflation, and income demonstration affect well-being, Frey examines such wide-ranging topics as democracy and federalism, self-employment and volunteer work, marriage, terrorism, and watching television from the new perspective of happiness research. Turning to policy implications, Frey describes how government can provide the conditions for people to achieve well-being, arguing that a crucial role is played by adequate political institutions and decentralized decision making. Happiness demonstrates the achievements of the economic happiness revolution and points the way to future research.

Curiously, economists, whose discipline has much to do with human well-being, have shied away from factoring the study of happiness into their work. Happiness, they might say, is an ''unscientific'' concept. This is the first book to establish empirically the link between happiness and economics--and between happiness and democracy. Two respected economists, Bruno S. Frey and Alois Stutzer, integrate insights and findings from psychology, where attempts to measure quality of life are well-documented, as well as from sociology and political science. They demonstrate how micro- and macro-economic conditions in the form of income, unemployment, and inflation affect happiness. The research is centered on Switzerland, whose varying degrees of direct democracy from one canton to another, all within a single economy, allow for political effects to be isolated from economic effects.